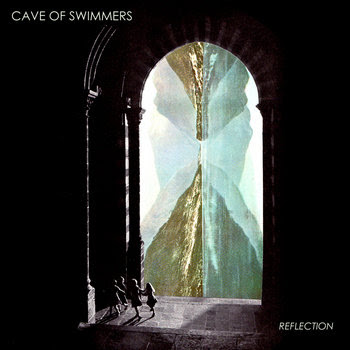 Miami-based Progressive Metal Duo CAVE OF SWIMMERS have partnered with Invisible Oranges for the exclusive stream of upcoming EP Reflection.

The one and only JASON NEWSTED had this to say about CAVE OF SWIMMERS:
“As musicians, COS are top-notch, naturally gifted players… As a band, they could go toe to toe with any of the decent up & coming bands that are currently performing live at popular European festivals. As a collection of sounds and songs in the heavy vein, orchestrated & performed by two people (live or in studio); Cave of Swimmers are truly unique in their creativity & execution, and… Their name can now be shouted & screamed in the same breath as Royal Blood & Deap Vally!! Cave of Swimmers warrant a new sound classification… if there is to be one; PROAGGRESSIVE MUSIC!!”
Reflection will be self-released on May 4. Having made one hell of a racket in the Florida scene, the virtuosic tandem of GE Perez and Toro are set to inspire the world metal community with their blend of progressive metal, fusion, and Latin styles, even including some operatic flair for good measure. CAVE OF SWIMMERS’ intricate and flawlessly composed music has an awe-inspiring effect, leaving audiences stunned that such a massive sound could be orchestrated by only two musicians. With an intuitive and playful style reminiscent of the great jam bands of previous decades, CAVE OF SWIMMERS have been described as a “truly progressive” outfit by Destructive Music.

01. The Prince of the Power of the Air

“Trust me you ain’t heard nothing like Cave of Swimmers… You can’t deny the huge ideas with every single riff.”

“What would happen if the Melvins formed a band with Pentagram? Or if Black Sabbath covered Rush songs? It would probably sound something like [Cave of Swimmers]…Definitely not for straight laced riff rockers, this band is adventurous and weird in the best way.”  –
Broward, Palm Beach New Times
“Cave of Swimmers are truly a progressive band, their sound progresses for miles. With an old school NWOBHM slant to their atmospheric doom rock combination you never know where the band are likely to lead you too next!”
– Luke Hayhurst, Destructive Music
“A band with all the potential to make major strides and deposits in the world of metal. Make a note of the name Cave of Swimmers you will be hearing a great deal more of these guys we suspect.”
– The RingMaster Review